Making the trip across the pond, we take a tour around the USA. Exploring Boston and New York, and seeing old friends.

It’s been a funny time, getting ready to travel again: sorting out PCR tests, trying to organise my gluten free meal on the plane, having to pack for a number of different climates. Dusting off these old habits is something I’ve looked forward to since the first days of lockdown, and by the time the preparation was done and we were on our way to the States, I really felt complete again.

Our journey began in Boston, the first time I have ever been in the city. I didn’t really know what to expect. It’s a big, chilly place mostly built on reclaimed land (A strange idea to me, coming from a little populated country like Scotland. Why not build on the land you already have?). We spent thanksgiving here, which is even bigger than I expected. It’s a lot like a UK Christmas really. Everything was closed, and we were super fortunate just to find an open restaurant that could give us a table. 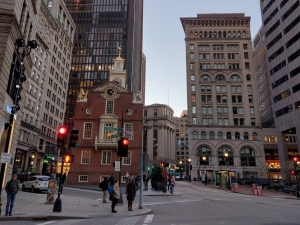 We did as we do in a lot of places and took the bus tour, although in Boston it’s a tram that takes you all around the city. There is a beautiful park, and the Charles River is a gorgeous sight to see. After that we took a somewhat cold and wet boat tour to see some of the islands that lie off the coast. We also spent quite a bit of time wandering around Chinatown, which as a coeliac maybe wasn’t my best choice as unfortunately gluten free was definitely not on the menu.

On To The Big Apple

Next we took the Amtrak to New York City. As it was just after the holidays the train was super busy but it was still very comfortable. It’s a nice way to travel really. We arrived at the city’s Penn station and made the short walk to the hotel. After dumping our stuff we took off to Times Square which was just a few blocks away.

It was absolutely chaotic. It’s been a long time since I have been in such an enormous city. It felt overwhelming at first, hordes of people, lights everywhere, body feeling like it was the middle of the day even late at night. I assume that Vegas feels very similar. I was amazed at the amount of people wandering the streets: police, helpers, cleaners. It takes an army to keep the place going, and to keep it incredibly clean. Their work shows though - it really is incredible.

We spent 4 days in a city that could take you years to get around. We decided to avoid a few of the really touristy things, and our first stop after the chaos of Times Square was the American Museum of Natural History, a massive building beside Central Park. The museum itself has to be one of the best things to do in the city, and we were thoroughly surprised by the South American exhibition which had some amazing artefacts from Peru. We also took the opportunity to wander a little around Central Park, and got the obligatory photo looking over the city skyline. 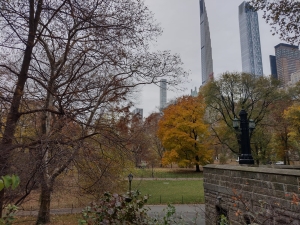 Not really knowing what to get up to the following day we headed towards Chelsea market, using the Highline to get there. The Highline walked us over the city and straight to the market, where we proceeded to have a rather delicious (and incredibly expensive) juice. We finished our walk by going through  and exploring both Greenwich Village and Soho.

We did initially have a cunning plan to walk everywhere, but in the end we bought the 2 day red bus ticket, which took us all over including Chinatown and the Brooklyn Bridge. We met a friend for drinks in Bryant Park, home of the ice rink you see in all those romantic comedies set in the city. That was lovely, as it’s been probably 10 years since we last saw each other. I also taught some yoga, working from the perfect sized space that I had in the hotel. I am loving being back to teaching, and I’m eager to increase the amount of yoga classes we hold every week. Fingers crossed that that’s something we can manage next year.

Currently, we’re sitting in a place called Sandbridge beach, just outside of the larger Virginia Beach. We’re visiting another friend and spending a lot more time working, meditating and doing yoga, which feels incredibly rewarding. You can even walk on the beach with dolphins here, which I am absolutely loving. 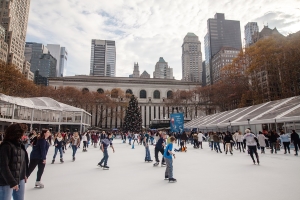 To save me from dedicating so much time to the office side of the job, we have another Kickstart placement that has just started. Joe is going to be dealing with marketing for us, and we’re overjoyed to welcome her to the team.

As we have previously said we are focusing on our Thailand Wellness Retreat at the moment. It’s a 12 days trip, and covers yoga, mindfulness, and meditation. In between there’s also plenty of travel, as we head to places in Thailand such as Chiang Mai, Bangkok, the Thale Noi lotus field, and a luxury stay on Koh Lanta. You can read more here: https://blukiteyoga.com/adventure-yoga-retreats/thailand-yoga-retreats/

Our other focus is our 7 day Luxury Peru Retreat which will visit the Sacred Valley, Cusco and Machu Picchu. During our stay we’ll be at the wonderful Willka T’ika Wellness Centre, practicing yoga and learning about local Shamanism with our dear friend Benito from the Community of Q’ero. Armando will be your guide and teacher on this retreat. https://blukiteyoga.com/adventure-yoga-retreats/peru-yoga-retreats/luxury-yoga-retreat-peru-march-2022/

We are also looking for some new employees as part of the Kickstart scheme. As mentioned previously they need to be between 16 and 24 years old and currently receiving Universal Credit. We are seeking an administrative assistant and an SEO specialist. Anyone that is interested please contact us, we would like to get these positions filled as quickly as possible.

You can get in touch here: https://blukiteyoga.com/contact-us/. This is also where you can ask us questions about yoga classes (or anything else really). You can also follow us on Facebook, Twitter or Instagram and keep up with our daily adventures.

As always, we love to hear from you.