We continue our extended journey on La Palma, La Isla Bonita, hiking, meditating and teaching and practicing yoga all with the assistance of Roberto 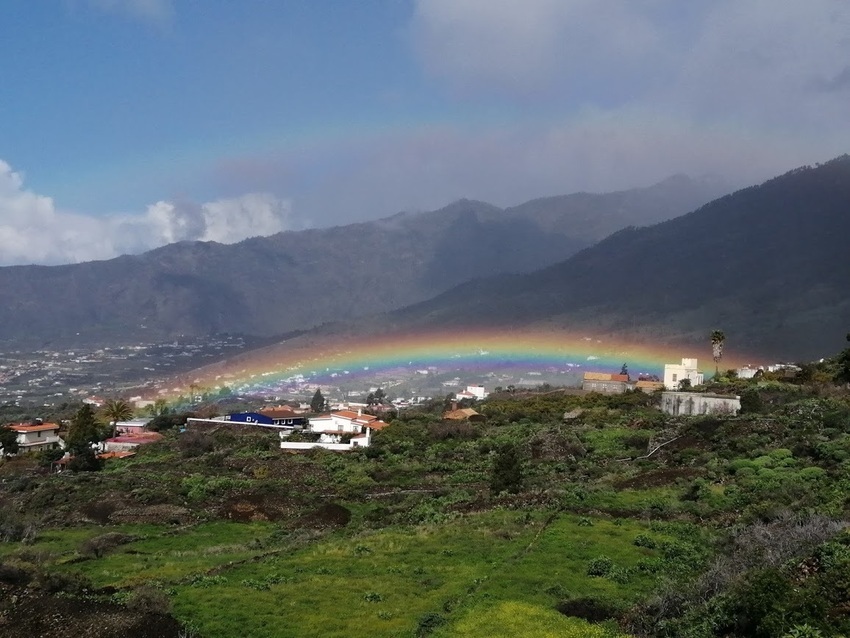 The below car is Roberto, he has been our faithful friend since we arrived on the island courtesy of our friend Raquel. He has been the reason we have been able to see as much of the island of La Palma. Normally we hire a car for a couple of days just to see what’s around but we have been able to really visit properly, do a proper shop at the supermarket, get around when we want. We don’t use him every day, mostly for special occasions and we use our feet when we are in town. This is Roberto at The Roque de los Muchachos which is the highest point on La Palma island. 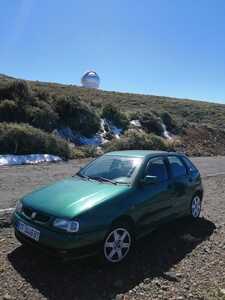 Roque de los Muchachos is the Observatory with one of the largest amounts of telescopes in the world including some of the really modern Cherenkov telescopes. The telescopes sit at 2396 masl and come from a variety of countries around the world studying the universe. The telescopes have been used to confirm the existence of black holes and the expansion of the universe. They are really important in the scientific world and the area where they stand is stunning with clouds coming over the ridges and snow on the hill sides. Unfortunately, due to covid the centre itself was closed but that didn’t stop us enjoying the landscape. You have fabulous views of the Caldera de Taburiente and the many telescopes. One of my favourite days out. 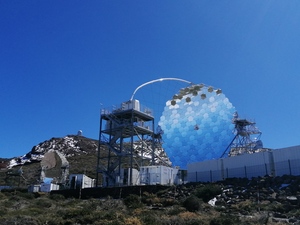 From our base in Los Llanos we headed to the well known La Palma hike, The Waterfall of Colours (Cascada de los Colores). Our trek was really stunning with part of it through the river bed passing Rivendell (really) and through a beautiful gorge cut away by large rivers, to get to the small but perfectly formed waterfall. The photos make it look a LOT bigger than it is. 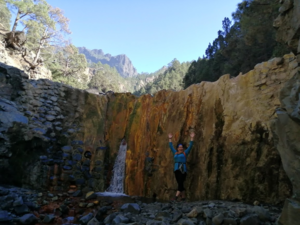 The trek passes water canals, small waterfalls, beautiful Canarian pine trees, many butterflies, small buildings and bridgesYou can also take the whole hike through the river bed but I personally think th actual pathway is lovely. This similar to last time was 19 k in total as we made a little mistake when close to the Waterfall of Colours. We should have continued through the river bed to the right, its about 500 metres until you turn the corner and there it is. We took a detour up towards Brecitos which is where the looped trek starts, here we came across a group of 36 people that had come from Spain so we sat just off the path while we waited for them to pass. I figure we added an extra hour to the trek but as I say it was really stunning and the quantity of butterflies along the whole route was astonishing.

After this trek we were looking for something a bit little shorter but also a bit more water. I had seen something on Instagram and off we went to Cascada de los Tilos which is on the North East side of the island above Santa Cruz and Pucllana, it is known as one of the main waterfalls here on La Palma. We parked up Roberto and said hello to a new friend a small bird. 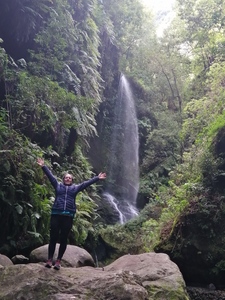 We then walked to the waterfall which was a short walk mostly on walkways and through a couple of very dark tunnels, you need a flashlight. It was pretty chilly and reminded me so much of the cloud forest I had seen in Peru. Lush, green, mesmerising. From here we took a short drive down to the town of San Andres, also a very worthwhile visit with its beautiful church and square. Be aware almost all the roads are super curvy on La Palma.

Another thing we have been getting up to here is paragliding, that was a first and what a fabulous experience. La Palma is full of incredible places and experiences. We had decided to go as we wanted to go a few years ago but the weather was against us so now seemed the perfect time and I also thought the chance to fly over banana plantations and the ocean was just too good to miss. The feeling of being in the air is quite unlike anything I have done before, the closest I got was its like meditating. It was such a wonderful experience on La Palma.

We also did a version of the Volcano Route trek on the La Palma, departing Pilar and hiking about 9kms before coming back to Pilar. The reason we did it this way is we had Roberto, otherwise we needed to get a taxi to the start and then a bus from the end back to the town. Anyway these are just ways to do things. 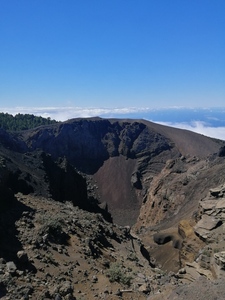 It was an incredible trek, not too difficult, the first part only was a bit steep and involved hiking uphill but the rest was beautifully undulated. The terrain is different throughout the trek with beautiful colours, Canarian Pine trees, views of the impressive Hoyo Negro crater and of course a volcano or 2. Here we met Luis from Madrid and we walked with him for a while until Pico Nambroque 1946 masl, well worth the extra few minutes walk as it offers spectacular views of the volcanoes. It was here at the top of the mountain that we had uninterrupted views of both the East and West of La Palma island. We left Luis and headed back to El Pilar where we picked up Roberto and headed back in time for yoga class. It is one of the most spectacular La Palma treks.

We embarked on a bit of a mission and started The Magic which is a 28 day gratefullness programme while we were on La Palma, what a delight it was, you can buy the book or check out a number of blogs online.

We continued to teach Iyengar yoga, yin yoga and held chats on meditation, we did a lovely chakra meditation. If you are interested in one or more of our yoga classes let us know or check out our availability here. Yoga Classes We also teach private yoga classes which can be traditional yoga or yin yoga, whatever you prefer and of course you can also sign up for a yoga retreat just have a look at our website and as I say we will be adding a Tenerife Yoga Retreat very soon, its taking a bit longer than I expected but we are nearly there.

You can also get a hold of us here  this is where you can also ask us questions about yoga classes or anything else really and you can also follow us on Facebook or Instagram and follow our daily adventures.

Thank you to everyone that supports us.